The human nervous system is complex, and it doesn’t take a brain surgeon to recognize that it controls just about every function within our bodies. Although there are numerous functions associated with the nervous system, this article focuses on the subdivisions of the sympathetic and parasympathetic nervous systems.

Understanding the sympathetic and parasympathetic nervous systems is especially relevant for paramedics because ALS personnel have access to medications that directly influence these two systems.

OVERVIEW OF THE NERVOUS SYSTEM

The motor division is divided into the somatic system and autonomic system. The somatic nervous system controls body functions that are voluntary. Voluntary means we have conscious control over functions such as skeletal muscles, sight and hearing. The autonomic nervous system controls involuntary body responses like the heart, lungs and digestion. 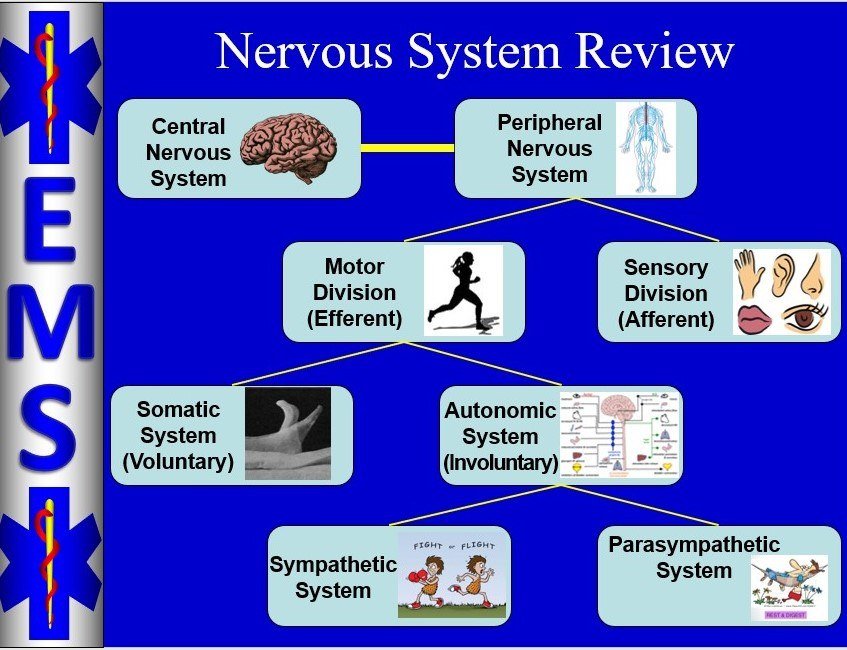 The sympathetic nervous system rapidly directs the body’s involuntary response to a perceived and/or actual dangerous situation. It is also activated during increased physical activity. Many people refer to the sympathetic nervous system as the “fight or flight” system. This is because it helps our body physically “fight” or “flee” from a perceived and/or actual threat.

Alpha1 receptors are primarily located within the:

When activated, Alpha1 receptors cause the following physical responses:

Alpha1 receptors are primarily located within the:

When activated, Alpha2 receptors cause the following physical responses:

Beta1 receptors are located within the heart and are responsible for causing the following responses:

Beta2 receptors are located within the:

When activated, Beta2 receptors cause the following physical responses:

Cumulatively, all these physical responses increase the body’s ability to respond to actual and/or perceived stressful situations.

For this reason, it is important for advanced-level EMS providers to understand the general, along with specific, functions associated with each of these systems. This way EMS personnel will understand how these medications cause the therapeutic goals they are attempting to achieve within their patients.